We provide local knowledge advise to plan your trip (selfdrive or guided) in Namibia - FREE.
We have professional, registered guides to give you the most informative and enjoyable time in Namibia.
We also do short noticed, hourly based tours in and around Windhoek & excellent game viewing drives.
We book your various accommodation and activities & sell great properties.

What shall I say other then ' it's medicine for the mind'
please share with me amazing moments.
Thank you


I am from this place - Africa, Namibia, Etosha.
13 years ago, I drove with my in-laws around - showing off amazing Namibia. And did not see one single elephant in Etosha. Granted, it was in the 'wrong' time of year.  The elephants had moved north to better grazing whilst there were rainwater in pools around. We even, got rained out of our tents and moved into a bungalow.
Elephants were part of my life.  My parents farm was just east of Etosha. School holidays we would regularly have a day outing to Etosha. We had to get up and leave house still in the dark to be at the Etosha gate at sunrise. Knowing about the big picnic basket mom had prepared, getting up and out of our cozy beds, were not a problem for us kids. In those days, Etosha was only open to the public the months around winter. Etosha and excitement, have always been sinonime.
Elephants were also sometimes a big heartache for my dad and other farmers of the area. Because the elephant herd of Etosha had outgrown itself, some elephant would break the fence and walked off to better grazing - the surrounding farms. Where they flattened farming fences and broke water installations. The farms were all extensively farmed with cattle. In the wake of the elephant escape path, followed other predators like lion and wilddog. Hearing frightened cattle bellowing in the dark of night mingled with the roar of attacking lions, is hairraising and fearsome - And vividly engraved in my memory. The government was unable to relocate the animals and left the problem solving for the farmers. Waiting for the men to return from such a hunt, burnt many candles.
During the last hunt on our farm, one of the men was seriously mauled(sp) by the male lion. And I, keep the memories with me.
Because of the prolific growth of the elephant herd, the government started the culling program. It was neccessary. The production of canned meat was effecient and "Eloolo with the elephant head on the sticker" was common on the shelves. There was no taste difference between Eloolo and any other beef canned meat.
Today, 13 years after my last visit to Etosha, we spent a few days there again during our 30 day RoadTripNAMIBIA safari. I was honoured to share it with my son. We saw elephants for Africa!  and even more elephants.
roadtripnamibia@gmail.com
+264 (0)81 202 7942
During our Road Trip Namibia Safari we had excellent sightings of elephants. But I remember a few more things about Etosha elephants.
Posted by admin AMKF at 4:50 PM


We went on a 30 day camping safari with David of RoadTripNAMIBIA. I loved it.
From this safari with RTN, a few videos resulted. Some might still be in-the-making.
BIRDING with RoadTripNAMIBIA   https://youtu.be/Sm9RbJTjjw0  12 Aug'18
Dating with RoadTripNAMIBIA https://youtu.be/tYf8IVYcUDw 06 sep'18
HORROR in Etosha
RTN guide&camp  https://youtu.be/4niFPfH_xFE 03 Sept'18
One night in AFRICA  https://youtu.be/qpFFOEaDF-Y 07 sept'18
ELEPHANTS for Africa https://youtu.be/UGuQktvd9AI 11 sept'18
PEOPLE of Namibia
"Katja!" SAFARI with RoadTripNAMIBIA
Herewith a view of some of our campsites, transport & guide.
Camping places were either in special permit required areas, or at lodges or on private campsites.
Passing another duster, or through a sandstorm in the Namib Desert when we could not see the road, but our guide seemed to know where he should go.
In the Namib a family of silver foxes visited our camp.
A couple of times, our guide picked us a good spot in the wild where the end of day caught us.
In Damaraland we slept at the foot of Brandberg, waiting for the desert elephants. Only lions and their tracks were around.
Impressive waterfalls were the thundering background music during our stay with the Ovahimba people.
Sometimes we had visitors and guarddogs.
Our guide pointed out the rocks, the trees and plants, the birds and animals, the people, the-ever-so interesting life around us, and made sure we experienced something unique. We inspected many of it - also the coffee-time-tree.
In the Caprivi we watched from our safe-shore-camp, a herd of 60 elephant going on a stampede.
We pitched camp at the foot of one of the majestic baobabs standing around our campsite in Bushmanland.
At the farmer in the freezing Kalahari, we checked out his quality cattle and the end-results.
Transport was good. We were not always easy clients, but our guide was always polite, informative, helpful - which I can only appreciate. It was a great safari and I take with me wonderful memories which I wish to share with you.
I can highly recommend David to give you a very special insight into amazing Namibia - at the comfort level of your choice.
roadtripnamibia@gmail
+264 (0)81 202 7942
Posted by admin AMKF at 4:47 PM

Welcome to the bonus we experienced while on a cultural safari in Namibia with David of RoadTripNAMIBIA. Yes, the sometimes striking, or camouflaged, or cute, but-never-sitting-still, birds. We didn't go birding - but we couldn't other, but noticed. They crossed our paths unexpectedly and always spread excitement. They are there one moment and gone the next.
Maybe we did not see animals around every nook or corner, but we definately saw birds and birds and more birds. Granted - if one were not looking, one would not have noticed.
BIRDING with RoadTripNAMIBIA
https://youtu.be/Sm9RbJTjjw0
Share with me some golden memories of the birds which brought a smile to my face during our safari in Namibia.  David, our guide, was a superb birder.  You are welcome to send David the info if you can identify some of the no-names in the video. roadtripnamibia@gmail.com

My heart will forever return to this wonderful place. Enjoy it with me. Narration in English.

Poachers and the new law in Namibia

2 poachers were killed and another badly wounded in the Bwabwata National Park in the fight to save the animals.
https://www.republikein.com.na/nuus/ystervuis-teen-stropers/
Rain in the north and east of the country. Partly cloudy in the central part and very hot in the south and west. 34Celcius in Windhoek.
Posted by admin AMKF at 6:45 AM

90% of the cheetah in Africa have disappeared over the last century. Also 90% of the natural cheetah habitat has been encrouched on.
https://www.republikein.com.na/nuus/kommer-jagluiperds-se-getalle-daal-drasties/
more info at  www.cheetah.org or email: ccfinfo@iway.na
Rain in the central north of Namibia. Bloody hot and dry in the southwest of the country. Windhoek cloudy and 30 Celcius.
Posted by admin AMKF at 6:32 AM

58 rhino and 76 elephant were poached in 2016
https://www.republikein.com.na/nuus/bedreigde-spesie/
31 Celcius today in Windhoek with few clouds.
Posted by admin AMKF at 6:27 AM

Last week Tuesday a Rhino was seriously wounded in the Etosha Game Reserve in Namibia. Six men have been charged with poaching. The Rhino died.

Zebra snakes are common around Windhoek.
Roadkill like this one though happens seldom.
Posted by admin AMKF at 7:35 AM 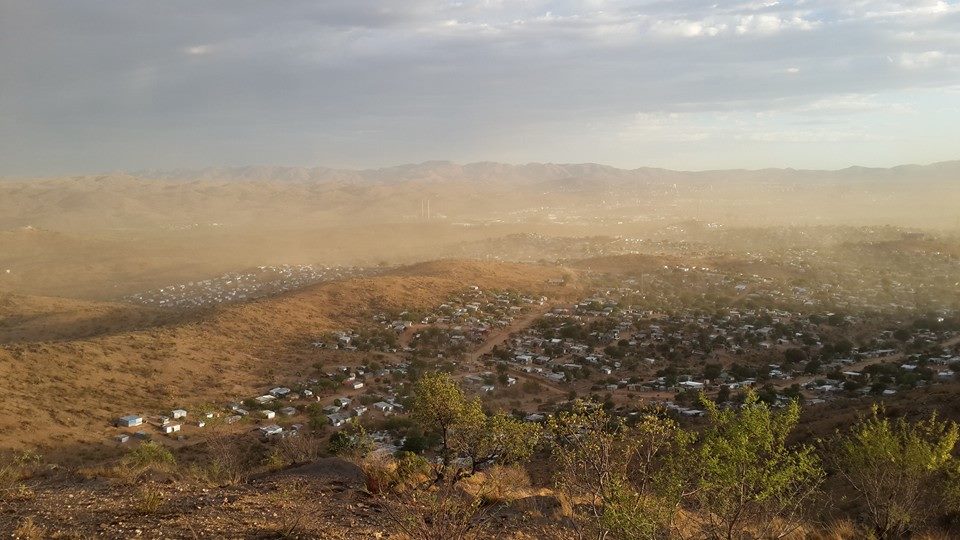 Windhoek, capital of Namibia, peaceful in the dust and smoke.
Windhoek has staked off enough ground (most still not urbanized) to be the largest city in the world.
Posted by admin AMKF at 7:51 AM